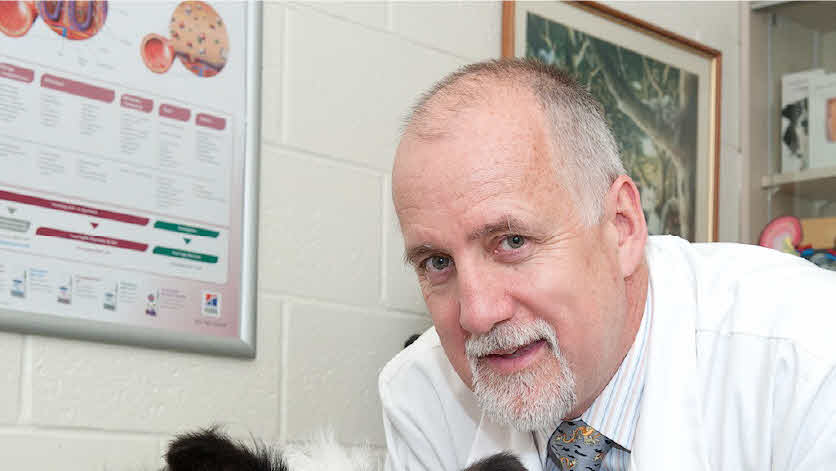 Peter is co-director of the Vector and Water-Borne Pathogen Research Group (VWBPRG) at Murdoch University’s School of Veterinary and Life Sciences. As part of this role, he coordinates research into the microbiome of Australian ticks.

In 2005, Peter was awarded the ASAVA Distinguished Scientific Contribution Award and in July this year, was honoured with the Ian Clunies Ross Award by the ANZCVS for his contributions to veterinary research.

“I’m a combination of veterinary clinician (and registered as a specialist in canine medicine) and veterinary parasitologist,” says Peter.

“Most of my teaching and clinical service has been in companion animal science and all of my research is to do with vector-borne diseases.

“Most of my teaching and clinical service has been in companion animal science and all of my research is to do with vector-borne diseases.

“Ticks are full of microorganisms – bacteria, protozoa and viruses – but to date there has been little study about this conducted in Australia.

“The recent ACAHF grant we received has allowed us to study another tick-associated microbe, this time one with zoonotic potential. Our interest was piqued by reading reports of higher seropositive rates of dogs and people to Coxiella burnetii (the aetiological agent of Q fever) in northern Australia.”

There are a few well known tick-borne infections of dogs in Australia, including babesiosis and cyclic thrombocytopenia (caused by Anaplasma platys), and some people become ill with spotted fever-type rickettsiosis (Queensland Tick Typhus and Flinders Island Spotted fever) following a tick bite.

There is also some current controversy in medical circles, both nationally and internationally, about the potential for Australian ticks to cause other disease in people, notably the so-called ‘Lyme disease-like’ illness.

He says that while funding for companion animal research is very difficult to source, the ACAHF is a godsend to researchers interested in working with canine diseases.

“We were interested in a possible link between the Q fever serology results and tick bite because we know that most dogs living in tropical northern Australia come into contact with ticks, notably the brown dog tick Rhipicephalus sanguineus.

“The grant from the ACAHF enabled us to study the bacterial diversity within R. sanguineus ticks which we sourced from northern and central Australia with the kind assistance of veterinarians and rangers working with the organisation ‘Animal Management in Rural and Remote Indigenous Communities’ (AMRRIC).”

The research work was conducted by Telleasha Greay, an Honours student at Murdoch University, with molecular expertise provided by Dr Charlotte Oskam of the VWBPRG.

Peter says the results have been intriguing.

“We studied a total of 536 tick specimens (all R. sanguineus), initially using a hydrolysis probe qPCR assay that is highly specific for C. burnetii. Quite unexpectedly, none of the ticks were positive with this test, so we changed our methodology and applied a deep sequencing technique based on the 16S rRNA gene (the V1 and V2 hypervariable regions).

“This time, analysis of the bacterial microbiome (a collective term for all bacterial DNA) revealed that Coxiella DNA was present in a high proportion of the ticks (82%-100%) but that it was not Coxiella burnetii. We believe that this represents the presence of other Coxiella species in these ticks, rather than the specific cause of Q fever.

“As is so often the case, this research has posed more questions that it has answered!”

Nevertheless, Peter explains that the funding his team received from the ACAHF has been invaluable as a first step towards unravelling this issue and says “we are enormously grateful for the support.”

Following on from the pilot study supported by ACAHF, Peter and his group have continued to investigate the Coxiella sp. organisms in ticks. They have discovered that a number of Coxiella organisms live in various tick species, probably as endosymbionts, and these are what they have identified in the Australian ticks. The results of these studies will be published shortly.

Peter hopes the findings from the study will help to establish the reason why seroconversion to Q fever seems to be higher in dogs living in the tropics. He suggests that “it possibly indicates crossreacting antibodies in the hosts between C. burnetii and the endosymbionts,” but says that this will “require further research, as will the question of whether these Coxiella species can cause illness in dogs or people.”

Under the microscope with ACAHF grant...

We talk to grant recipient, Dr Claire Sharp, a senior lecturer in the School of...
Under the microscope with ACAHF grant...

Update on the Return to Work program for...

The Return to Program initiative for students was launched last month to a...
Update on the Return to Work program for...

Under the microscope with ACAHF grant...

We talk to Lisa Smart, a senior lecturer in Veterinary Emergency and Critical...
Under the microscope with ACAHF grant...